For the past 7 years, Black Rock Retreat has partnered with a ministry called Mountain Conquerors.  We asked Pastor Matt Kroll to share a little about his experience with our Challenge Ropes Course program.

Could you introduce yourself and tell us a little about the Mountain Conquerors program? 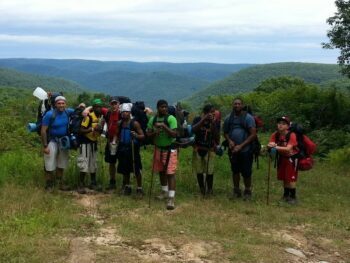 I am Matt Kroll, coordinator of Mountain Conquerors.  I am the pastor of The Lord’s House of Prayer city church on Vine St. Lancaster.  Mountain Conquerors was a vision God gave me years ago which became a reality in 2010.  Mountain Conquerors is an outdoor adventure camp that is like no other in Lancaster.  It provides teens an experience that will last a lifetime.  The camp runs annually on the second week of August.  The camp’s focus is to take Lancaster teens out of their urban environment and into the outdoors, in order to help them develop good character.  We use the outdoors (hiking, high and low ropes courses, rock climbing and backpacking) and its experiences to push the kids past their comfort zones or better put, to put the kids under pressure.  It is under pressure that real character comes out.  We don’t care if bad character comes out; in fact we expect it to see it.  The camp is designed to handle this, as it presents the greatest teaching moments for everyone.   We use different tools to set character goals, monitor the goals daily, and review them.  The cool part is the teens get to evaluate us as well.  We are in this together as it takes a team to successfully complete this week-long camp.  Every day we have different people from Lancaster County ranging from pastors, entrepreneurs, school teachers etc. teach topics such as character, potential, teamwork, vision and goal setting, and more.  Once taught then we use the outdoors to put it into practice.  For example, on day 1 we take the teens on a three hour hike along the Susquehanna hills, after 1.5 hours we place a stake in the ground.   Day 2, we teach the teens about their potential and that it is a dormant ability that needs them to put a demand on it.  Immediately after the teaching we take them back to the same hike as the day before and see if they go past their mark, and not just past it, but how far past it.   This applies to everything we do including the ropes course.  One thing that we do as well is take the teens to either a woman’s shelter or pregnancy center to partake in a service project and to teach them that men are to protect woman not prey on them.  On Thursday night we conclude the week with a 23 mile backpacking trip that gives the teens a chance to put everything they have learned into practice.  The trail we pick is very difficult and takes everyone working together.  It gives the teens an opportunity to start and finish something they all have to work very hard for.  I love seeing the look on the teens’ faces as they complete the hike as many wanted to quit many times during the process.   The entire camp staff is volunteer and not for profit.  We usually have a staff of seven or eight skilled and diverse.  We all give up a week of our life to invest into the next generation.

How has Black Rock’s Challenge Ropes Course program played a role in Mountain Conquerors over the years? 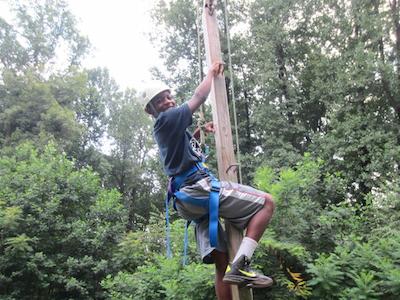 Black Rock Retreat has played a huge role!  When the vision became a reality, I was given a gift of $1000 from the church network called Lancaster United.  Though that was a huge blessing there was no way I could run the camp on that budget.  I reached out to local ropes courses with the vision and a request for help.  Black Rock Retreat responded and said they believed in the vision and wanted to help it get off the ground.  That year they donated their services for both the high and low ropes courses for free!   Black Rock Retreat is part of Mountain Conquerors.  They are more than the ropes course; they are integral to the program.  You can see this lived out as the staff works with the kids.  Jon oversees the ropes course at Black Rock.  I don’t see him as separate from Mountain Conquerors but part of it.  He is amazing and to be honest, the best ropes course leader I have ever worked with.  He has a gift to know what elements to use and how to teach the group.  He discerns the group and uses the course to encourage, challenge and teach.   The high and low ropes course is a huge part of the camp.

Why is a ropes course experience an integral part of the Mountain Conquerors program?

The ropes course experience is integral to Mountain Conquerors as it accomplishes two major components 1-confronting one’s fear and 2 – establishing principals and character needed to work as a team.  At Mountain Conquerors the Lord told me to run the teens through the high ropes course first than the low.  Usually the opposite is done.  The reason I believe is that one of the biggest hindrances to anything in life is FEAR.  Fear stops the potential God has placed in us from coming out.  Humans mask/cloak/hide fear.  We tend to make statements like, “I just don’t want to do it”, “I don’t feel like it” etc.   We make excuses for our fear.  When we take the teens to the high ropes each individual is confronted with themselves, and if there is fear it will rise up.  It is amusing to see the teens put on a “tuff” façade to hide their fear.  The Black Rock Staff is really good at encouraging the teens to take a step forward past their fear.  They never pressure or force, only encourage.  The high ropes deals with the individual and their personal fears, goals, and attitude.  I love this part as life in many ways produces the same experience.  If the teens can overcome it sets them up to “do it again” in life as they will remember their experience on the high ropes.  The high ropes course also gives a glimpse into the next phase of team building on the low ropes course.  When you have teens that choose not to participate due to fear or only go part of the way up you can observe the group dynamics.  Will others make fun of, or harass, or make themselves look better by downing another.   This gives opportunity to take responsibility for our actions and to teach a better way.  This is the character transformation we strive to achieve. 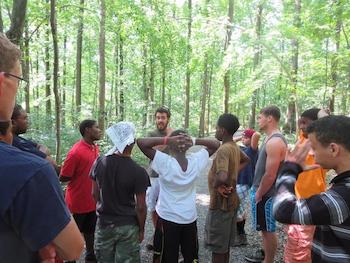 The low ropes course is all about team and working with others.  It moves from the individual focus to others’ focus.  Better said, it moves from “I” thinking to “WE”.  In life we tend to be more individual in our thinking when the Bible tells us that there is power in WE but WE requires humility.  To acknowledge I need you and you need me (trust), that your way is better etc. that is very hard to do.  The low ropes presents opportunity for this “WE” thinking to occur.  The great thing is if it does not, the course element will fall apart.  If you want to succeed at the low ropes course you have to learn to surrender to the “I” in you.  There are so many principles and character traits that can be learned during the ropes course.  Again, Jon does an outstanding job of discerning the group and picking the low ropes elements that will help confront possible hindrances to team work and teach the teens through the experience.  Also, depending on how the team does, Jon will change up his plan to further challenge the team.

We later use the high and low ropes course experience on the backpacking trip.  The entire trip is focused on team.  The backpacking trip is very difficult.  Most, if not all, have never done anything in their life so demanding.  We as a group have to start and complete this together.  We have to learn to encourage and help each other because we are in this together.  The lessons learned during the low ropes course are remembered and retaught through the entire trip from start to finish. During the last day there is a mountain (over 1000’ of climbable elevation) that must be climbed.  It is very difficult.  This is a part of the backpacking trip where we revert back to the lessons learned at the high ropes course.  We place a leader at the top of the mountain as well as leaders along the trail.  Then we tell the teens that they are going to hike this mountain alone.  We communicate that though team work is great there are many times in life where it is you, the situation and God.  How you deal with the situation is totally up to you.  God is there to help, encourage and teach you but you have to accept his ways/help or not.  The outcome is up to you, the situation can handle you (leaving you frustrated) or you can handle the situation (with joy and peace).  Then we space the kids out and have them climb the mountain (we time them as well as we have them set goals for themselves).  Everyone makes it to the top, and is left with an experience that is built on previous experiences of the week.  Reinforced experiences, what more could you ask for.  I cannot speak highly enough of the ropes course and how integral it is to our camp.  It provides foundational life experiences in which to build on during the rest of the camp and more than that, the teens’ lives.  If we did not have these ropes courses in our camp and the experiences they provide, our camp would not be what it is.

Could you share a story from this year’s ropes course program?

There are many stories, but I will share my favorite.  One teen had a problem admitting they needed anyone’s help.  He always was the independent one, doing it all on his own.  I call this the tough guy factor.  Jon, as he had done in the past, took our group to the low ropes element called the “castle”.  Basically everyone is blind folded and brought into a roped in area.  Meaning a rope is wrapped around trees so that those inside this roped in area are contained by the rope.  There is no opening to get out.  The teens are instructed that they cannot take their blindfolds off, and they have to keep one hand on the rope at all times.  They are all told, “There is a way out, if you need help, raise your hand”.  The participants usually go around the entire circumference of the ropes placement.   It is here that the instructor will say, “Anyone need help?”.  Usually one or two will raise their hand, prompting the instructor to quietly lead those with hands raised under the rope and outside the “castle”.  Blindfolds are removed and the participants who raised their hands see that the way out is simply admit they need help.  This process continues until everyone raises their hands or we just run out of time.  As always, this year there was one who just would not ask for help.  For over 15 minutes with several attempts to get them to admit they needed help, finally the teen yielded and surrendered his pride.  This was a huge lesson for this teen as they realized, his pride will keep him stuck.  This teen shared later that this was the biggest challenge and experience that he wants to continue to grow in after the completion of the camp.

For more information on the Mountain Conquerors program, please visit their website.