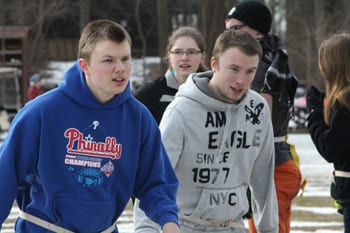 Proverbs 3:5 says: “Trust in the Lord with all your heart, and lean not on your own understanding.” For many Christians this can be the most daunting challenge in God’s word. Especially when you have a brother with a disability, spending his first night away from home at 19 years old at a winter retreat. Mark Ross was born on December 4, 1995. He was the third boy born into a happy, loving Christian home. It didn’t take long for God to shake things up. The oldest brother was in third grade and I, the middle brother, was in first grade, when Mark (almost two) fell and hit his head on the corner of a fish tank resulting in a trip to the emergency room. After a traumatic brain injury and a right hemispheric stroke, Mark made it through despite the doctor’s prediction that “he wouldn’t be worth much.” This accident tested my family to the core. Times like these cause one to question, “Why God!? How could this happen?”

The answer is my absolute favorite character trait of God. Romans 8:28 states: “And we know that for those who love God, all things work together for good.” God used Mark’s fall for an amazing purpose. Not only did He create an amazing young man of God in Mark, but God shaped an entire family. Through Mark’s journey, God has affected so many others by showing His faithfulness. It remains a big challenge for our family each time Mark takes another step towards independence. It was an enormous act of faith when my parents decided to allow Mark to go on this winter retreat at Black Rock. God couldn’t have picked a better place for Mark’s next step. My family lives about a mile away from Black Rock and we have known Josh Foley (the Summer Camp/Winter Camp Director) since Mark had his accident. I was incredibly proud of my parents’ faith to allow Mark to go, but I didn’t realize how challenging it would be for me as a youth leader on the trip to trust as well.

As soon as Mark and I arrived, he met his first trial. Since it was winter camp, the path to our cabin was very icy. Mark has absolutely terrible balance (no offense, Mark) and I knew he was going to fall multiple times this weekend. I could picture my Mom if she was there saying something like, “Welp! We tried it but this place is not safe! We’re going home, Mark, maybe next year.” But Mom wasn’t there to protect Mark this time, it was just me. I told him, “you are going to fall, but you’ll be alright. We can make it across.” And we did! Mark ended up falling only twice that weekend which was a miracle in itself!

But my real test of trusting God came during Saturday afternoon free time. We were given the choice between various activities until dinner. I expected to use my older brother powers of persuasion to have him do what I wanted to do which I didn’t think would be a problem since Mark is usually eager to follow big brother’s lead. Then God threw the curveball of the weekend. I couldn’t believe it but Mark was dead-set on playing a Black Rock version of Giant Dutch Blitz which neither myself nor anyone else in my group wanted to play. Surprisingly, my older brother persuasion had no effect on Mark’s decision. He was going to stay in the chapel and play the game while I decided to go play basketball. As Mark’s protective older brother, the last thing I want to do is leave him in a situation where he would feel unsure of what to do or could possibly come into harm. My instinct was to find someone we knew in the chapel and ask them to keep an eye on Mark and make sure he stayed safe. However, I couldn’t find anyone, and it forced me to realize that Mark would be alright and he wasn’t alone. The God of the universe was in control of Mark and He could take care of him better than I could. So I walked away. I left him there to play Giant Dutch Blitz and I was scared out of my mind. As I walked away I turned my eyes, brimming with tears, upward and said, “God, you got him, I know you’ll take care of him.”

A little before the Dutch Blitz game was scheduled to end I decided to walk back and see how he was doing. I prayed as I walked back, trying my best to trust that he was alright. God’s timing was perfect in that moment. The exact second I saw Mark walking out of the chapel, was the exact moment he needed me again. Mark isn’t the best with directions (no offense again) and promptly walked out and began walking in the complete opposite direction of where he should have been going. He was oblivious to what was going on and not sure where to go next. So I yelled, “Hey Mark! Do you know where you’re going?” To which he replied, “Uhh not really,” with a sheepish grin. Fortunately, I was there to guide him to the next activity. God tested my faith and then placed me in the perfect spot for my voice to carry and lead my brother to safety. If I had arrived one minute later who knows where he would have ended up. Isaiah 40:11, “He tends his flock like a shepherd: He gathers the lambs in his arms and carries them close to his heart; he gently leads those that have young.”

Mark made it through his weekend away at Black Rock’s Winter Camp because God was in control the whole time. He let Mark fall on the ice because He knew there would be people to lift him back up. He let him stray because He knew that Mark would be led back. And yes, God let him go through the accident when he was two because He knew what he would become. At nineteen years old, Mark has been homecoming King, he works part time at a greenhouse, he serves at Celebrate Recovery weekly and leaves everyone he comes in contact with a little more joy. Oh yeah, and Mark recommitted his life to Christ at Winter Camp that weekend. Not because anyone told him he should, not because he saw his brother doing it, but because God called upon and he answered, because God has Mark.